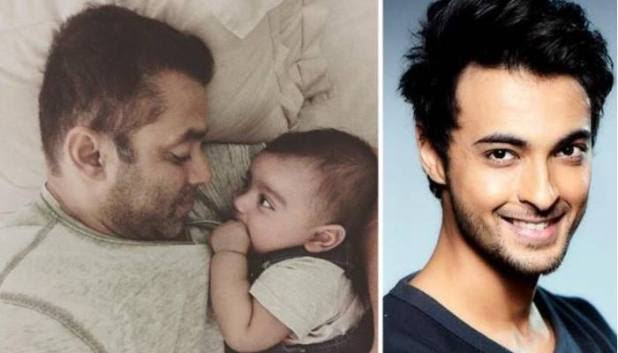 Superstar Salman Khan has a bad temper and this is not hidden to anyone. That’s why no one in his family ever tried to wake him but there is one person who is the dearest to Salman Khan and can do anything to play with him. Yes, we are talking about lil champ, Ahil Khan. Salman’s sister Arpita and her husband’s Aayush Sharma’s kid, Ahil is someone whom Sallu Bhai loves the most.

In a recent interview with Deccan Chronicle, Aayush Sharma whose debut movie LoveYatri released today which is the 5th of October speak about Salman’s equation with nephew Ahil.

Aayush Sharma said, “With Salman bhai, Arpita has been more like his daughter than a sister. He’s always taking care of her like a daughter. Now Arpita and his son is even special. It’s not just for Salman bhai, but the whole family. Salman bhai also gets a little break with Ahil. If Ahil wants bhai to get up, he’ll pull him and bhai doesn’t say anything to him. But we’re not allowed. He gets away with everything. Ahil doesn’t sleep before 4 am. He likes to party with us. Bhai even takes Ahil with him to shoot.”

He further added, ” When I started shooting for Loveyatri, Ahil was still babbling. Now when I come back home, I see him making sentences and communicating fully. So for me I’ve lost a big chunk of his time. Whenever I come home and hear him say something new, I look at Arpita and say, ‘Every time. I missed out on so many things.’ He walks so fast now! I remember holding him for the first time in the hospital. He once told me, ‘Papa aap Chogada’. I have missed out a lot but I think it will be worth it when Loveyatri will be hit and he will be proud of papa when he goes to school”.

Talking about Salman’s work front, he is busy shooting for his upcoming flick BHARAT alongside Katrina Kaif. The film’s director is Ali Abbas Zafar which also stars Sunil Grover and Disha Patani and Nora Fatehi. BHARAT is slated for the release of next years’ EID.