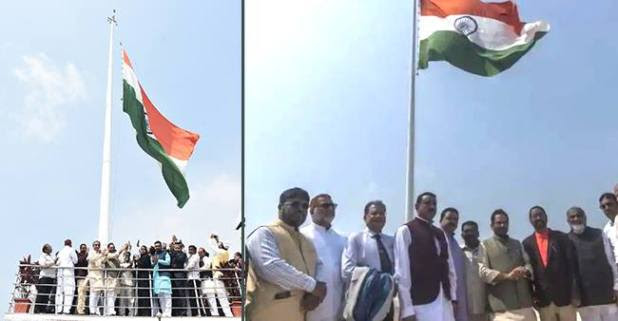 On  Wednesday, the Union Minister for Minority Affairs Mukhtar Abbas Naqvi unfurled India’s highest tricolor on the terrace of the majestic Haj House in Mumbai. The national flag measure 20×30 feet and stood 350 feet above the ground level. The tricolor is made of non-fading polyester and manufactured by The Flag Company, which is famous for manufacturing big flags.

Today announced subsidy free Haj 2019 with unfurling the highest tri-colour installed on terrace of any building in the country with such height at Haj House, Mumbai. pic.twitter.com/0am9mGKLT1

On Twitter, the BJP leader has shared a picture of the highest tricolor installed on the terrace of any building in the country with such height at Haj House, Mumbai.

Mukhtar Abbas Naqvi said that tricolor will enhance the pride of Mumbai and neighboring areas. The Haj House has 19 storeys and was built in 1987 to offer boarding, Lodging and other facilities to Haj pilgrims.

The flag manufactured by The Flag Company is of similar size to those installed at the Bandra- Worli Sea Link and Mazagaon Docks.

Naqvi described it as ‘historic’ and said, “Today, we have unfurled the tallest national flag on any Indian building. This will also enhance the pride of Mumbai and its neighbouring regions.”

.@naqvimukhtar, Minister for Minority Affairs, hoists tricolour at Haj House which is believed to be the highest installation of the flag.
Here’s an exclusive conversation: https://t.co/CnPBmClvU8 pic.twitter.com/5RQxEZLTZh

“Accommodation rates in Saudi Arabia will be the same as 2018,” the minister further assured, adding: “This year (for 2019 Haj), we have 21 embarkation points, the latest (to be added) being the Calicut airport.”