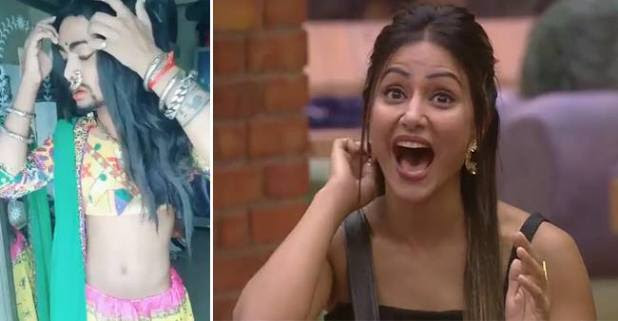 On Sunday, Ekta Kapoor unveiled the promo of Kasautii Zindagi Kay 2 which featured Hina Khan as Komolika. The promo made the Sundays for the fans and viewers of Kasautii  Zindagi Kay 2. The actress was looking stunning in the black outfit with a flaunting her back.

The promo is a Navratri special one which showcases the gorgeous actress with a nose pin, Kamar-bandh, Jhumkas, and a necklace. Hina has already gained popularity among the masses for her fashion sense. Just after the promo was out Hina was trending all day on Twitter.

Meanwhile, a fan has shared a video where a guy has dressed up as  Komolika with full make-up, tattoo, and everything. This video is quite hilarious. It clearly shows that the boy has made a lot of efforts to get a look same as ‘Komolika’. It made Hina and boyfriend, Rocky Jaiswal a little awkward, but Hina took it sportingly and appreciated the effort.

The actress rose to fame by playing the role if a sansakari bahu ‘Akshara’ in ‘Yeh Rishta Kya Kehlata Hai’. She impressed everyone by playing a role of an Indian Bahu on the small screen. Later, she was also seen in reality shows like Khatron Ke Khiladi and Bigg Boss Season 11.

Now as it is confirmed that she is the ‘Komolika’ for this season, everyone is really excited. In an conversation, Hina told, “Komolika is not a typical vamp, she has a lot of a shades to her which unfold as the story progresses which enticed me to play the character. Viewers will see me in an entirely new avatar and I always wanted to try something new to push myself as an actor.”

Well, it is going to be quite interesting to see Hina playing a unique role. Her fans are really waiting to see her in the upcoming episodes.