Girl was alone at midnight on her way back home, a driver and conductor waits till she got an auto 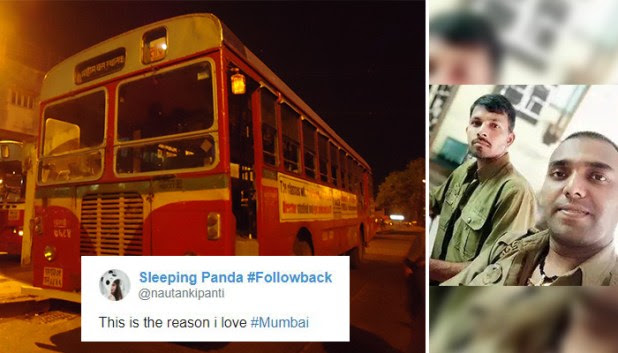 Women play a very significant role from their birth till the end of their life. Daily we read as well as read a lot of stories about women who are being physically disrespected. In most of the cases, the women are blamed for wearing short clothes, being alone and for being drunk.

But here’s a great example which is far beyond these reasons. And when something unusual like this happens it wins a lot of heart around the country.

In Mumbai, a woman took bus no. 398 but by the time she reached the destination, it was already 1.30 a.m. For a woman, it is very difficult to travel late at night. The driver of the bus asked her whether someone is going to pick her up or not. The girl said no. The driver and conductor soon realized that it is not safe for a woman to stand alone on the stop so they waited for the auto. However, it was different in this because the driver and the conductor of the bus stayed with her on the stop until she founded an auto safely.

Later the girl posted for the same and thanked the Driver and Conductor for their caring gesture. As soon as this was on social media the people also responded for the same tweet.

This is the reason i love #Mumbai

I would like to thanks #Best Bus driver of 398 ltd. Who dropped me at 1.30 am at a deserted bus stop and asked me if someone is there to pick me up. To which i replied no. He made the entire bus wait until i got the auto. @WeAreMumbai

It was highly a great gesture shown by the conductor and driver of Bus No. 398 and several people are thanking them for showing such an awareness.

About 3 yrs ago, was here to answer an exam. Caught an auto from my hotel to the center. Missed the address and it took us a while to reach the location. When I freaked out because I was late and had no change to pay, I was asked to go and answer my paper well and pay whenever.

This has happened with me too. I was travelling from pune to Mumbai.Met my lecturer on my way…when we reached boriwali bus station,knowing that I was alone & it was 11pm..he stood there with me, untill I booked a cab,gave me his and his wife’s number in case I need any help.

They could have driven off and left her alone. It totally was not their duty to wait for the girl but they showed a gesture of humanity which is being appreciated all over on the social media. The girl herself appreciates the bus driver and conductor on the social media which almost grabbed all the attention.