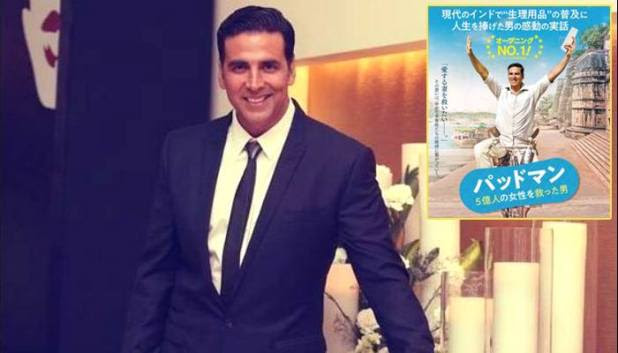 Bollywood blockbuster Padman which stars Akshay Kumar and Sonam Kapoor will soon hit the screen at the Tokyo International Film Festival. Directed by R. Balki, this film is about menstrual cycle or monthly period which is still a taboo in India is an eye-opener for many people. From all over, this film is applauded by critics and audience. It also did a huge business of 120 crores at the box office which was made on a budget of Rs 20 crores. This film also stars Radhika Apte and is based on Twinkle Khanna’s book The Legend of Lakshmi Prasad. Amitabh Bachchan also made a short appearance in the movie as himself.

This film is a real story of social activist Arunachalam Muruganantham of Tamil Nadu. He made low-cost sanitary pads for women in villages in India. Akshay Kumar played his character in the movie.

Recently, Akshay Kumar took to his Instagram official and shared the new Japanese Poster of PadMan along with the caption, “Here’s the Japanese poster of PADMAN! Excited for the film to be screened at the Tokyo International Film Festival!!”

Have a look at it here:

Currently, on the work front, Akshay Kumar is shooting for his upcoming movie Housefull 4, directed by Sajid Khan and stars Kriti Sanon and Bobby Deol in the lead role. Along with it, Akshay’s movie based on Indian period war drama film Kesari opposite to Parineeti Chopra is also awaited. This is a movie based on the Battle of Saragarhi in which Akki is playing the role of the soldier Havildar Ishar Singh.

Akshay was last seen in Gold alongside Mouni Roy and did a wonderful biz at the box office entering in the 100 crore club. Akshay’s upcoming Bollywood flick 2.0 is the most anticipated movie of this year as the promo of the film gives everyone chills in which Akshay is playing a negative role. 2.0 also stars South Superstar Rajinikanth and Amy Jackson.

Well, we wonder this year is playing luck cards for Akshay Kumar as the actor is lined up with many movies.