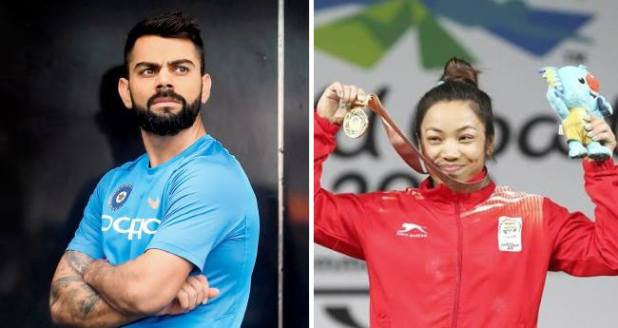 If Sports Minister Rajyavardhan Singh Rathore approved the list then Virat Kohli will become the third Indian cricketer to achieve this after Sachin Tendulkar (1997) and MS Dhoni (2007).

Also, last year in World Championships Weightlifter Chanu impressed everyone with her fabulous performance where she won the gold medal in the 48kg category. Grabbed the yellow metal in this year’s Commonwealth Games but can’t perform in the Asian Games 20118 because of her injury. She will follow the footstep of Karnam Malleswari (1995-Weightlifting) and Nameirakpam Kunjarani (Weightlifting-1996) if won the Khel Ratna Award and become the third weightlifter who won this pride.

The BCCI has been nominating Kohli for straight 3 years but in 2016, it was given to Sakshi Malik, PV Sindhu and Deepa Karmakar for their outstanding performance at the Rio Olympic Games. Last year, the Khel Ratna was awarded to former India hockey captain Sardar Singh and para-athlete Devendra Jhajharia. A close source told PTI on anonymity condition, “Yes, Virat Kohli and Mirabai Chanu’s names have been recommended by the awards committee”.