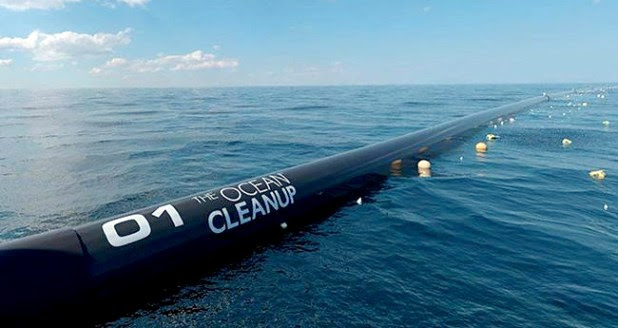 A 16-year-old boy Boyan Slat from the Netherlands once went for diving in the sea of Greece and that day changed his life forever as he saw the condition of the ocean. He recalled, “There was more plastic than fish.” The boy is all grown up now and he is 24 and has been trying to figure out how to get rid of the plastic from all the worlds of oceans.

This mess is made up of nearly 5 trillion pieces of plastic which are floating under the surface and taking the marine life slowly. Not only that, it is causing an annual financial loss of $13 billion, estimated by the UN.

Boyan Slat has come up with his dream project of ridding the ocean of plastic and here is how he started the World’s Most Ambitious Ocean Cleanup Started the last day. In 2013, Slat started the non-profitable The Ocean Cleanup in his hometown Delft. He is developing advanced tech to eliminate ocean plastic.

Ocean Cleanup’s first cleaning venture is directed at the Great Pacific Garbage Patch which lies between Hawaii and California and that’s where plastic waste has been collected. The surface area of garbage patch is 1.6 million sq km which is twice the area size of Texas or three times the size of France. Pretty big, isn’t it?

Approximately, the mass of plastic in the Patch is 80k tonnes which is equal to the weight of 500 jumbo jets. Also, it is estimated that 1.8 trillion pieces of plastics are floating in the Patch. You know, the Great Pacific Garbage Patch comes in the world’s largest gyres where plastic waste is being accumulated. A gyre is a circular pattern of currents in an ocean basin- according to the indiatimes.com.

Slat and Co. say that a full-scale rollout or the monster machine could clean 50% of the Patch in just five years. Here’s how it looks: The Ocean Cleanup claims that it is able to remove the plastic from the ocean 90% by 2040. And once the garbage is being collected it can be shifted for further processes and it can be mix with dirt and sometimes smelly material which is used to make new products.

Such an innovation, Slat gave to the world when it needs the most.