Kaun Banega Crorepati 10: Binita Jain Will Be The First Crorepati Of The Season 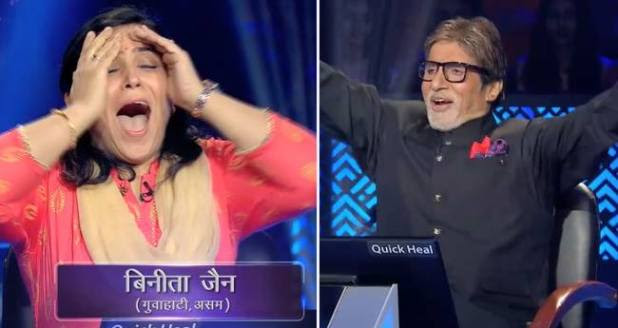 Kaun Banega Crorepati 10 is one of the popular shows on the small screen. The show has successfully reached on its 10th season with the megastar Amitabh Bachchan hosting the show for years. KBC 10 started airing from 3rd of September from Monday to Friday entertaining the audiences and also inspiring many.

Well, the show has aired many episodes till date but there wasn’t any contestant who became a crorepati. But our wait is finally over as the 10th season of Kaun Banega Crorepati has finally found it’s crorepati winner.

Before Binita, there were just two contestants Bhagalpur’s ticket examiner Somesh Kumar Choudhary and Gujarat’s graphic designer Sandip Savaliya managed to win Rs 25 lakh each. However, both of them quit the show after they were unable to answer the 13th question.

Talking more about the contestant Binita, she is a mother of two. The lady was successful in answering all the 13 questions and will now answer Rs 7 crore question on 2nd October. It will be interesting to see if she wins the coveted prize money.

Last year in the ninth season of KBC none of the contestants won Rs 7 crore but Jamshedpur’s Anamika Majumdar pocketed Rs 1 crore and quit the show when she couldn’t answer the jackpot question. Women are definitely on a roll!

Published by Harmisha Chauhan on 26 Sep 2018