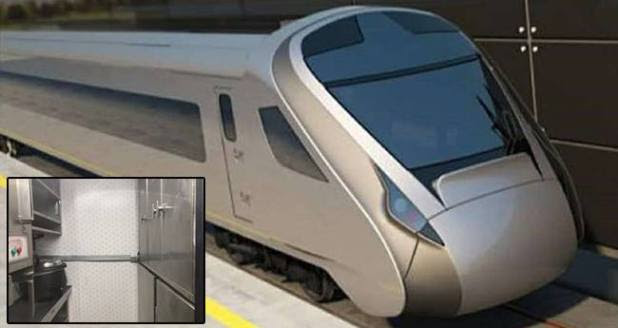 Indian Railways first Engine less train is a big step towards technological development of the country. Not only it will be a revolution, but will also promise a comfortable travel to the passengers. Train 18  will be India’s first engine less train. It will have automatic doors with sliding footsteps, WiFi, big luggage racks, comfortable seating, diffused LED lighting, continuous windows, modular bio-vacuum toilets, passenger infotainment systems and much more. The train will be manufactured in India by the Intergral Coach Factory (ICF) of Chennai under ‘Make In India’ initiative. ICF claims that it will be manufactured at around half the cost of a similar train being imported to India. It will be a semi-high speed train which will run on a speed of 160 kmph and will replace India’s fastest Shatabdi Express train. It has been designed and developed in a record time of around 18-20 months.

The first prototype of Train 18 will undergo three month trials by RDSO (Research Design and Standards Organisation) before it is put to service. According to an official associated with this project, each coach will have  its own mini pantry with better equipments than Shatabdi Express. He told a leading daily, “We are importing equipment that is used to heat food and chill drinks. While the overall structure of the mini pantry will be similar to that of Shatabdi Express trains, these modern heating and chilling equipment would offer better experience to passengers.” With this, food would be better heated and the beverages will be served cold

Railway Board Chairman Ashwani Lohani recently said that Train 18 is likely to run on the Delhi-Bhopal route from January 2019. It will be an air-conditioned train with executive and non-executive chair car coaches. It’s technology is similar to metro trains and therefore it will eliminate the need of an engine.