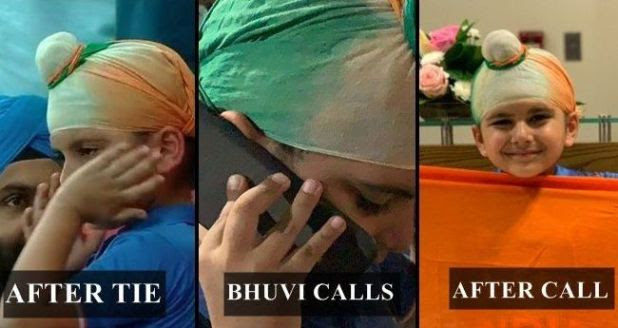 Cricket is celebrated like a festival in our country. For some people, it is like a religion which they follow blindly. While some connect it with their emotions. When India wins a match, the whole nation comes together to celebrate the victory and when it loses any match, they burst into tears too.

Indian batsman Ravindra Jadeja just missed when a solitary run was required off two balls to win. Though the match was announced in a tie, for Afghanistan, it was a sure win as it take the team on their way out of the ongoing Asia Cup.

Meanwhile, a little Indian kid’s cry after the match and his father trying to console him became the point of attraction. Seeing the match ended in a tie, the little kid broke down into tears. Later, it was found out that Indian pacer Bhuvneshwar Kumar made a call to him and made the boy’s tears turned into smiles.

The kid’s father Amanpreet Singh took to Twitter and shared a post which reads, “He is happy now and looking forward to watching the finals…Really kind of @ BhuviOfficial to call and cheer him up.”

Not only Indian cricketers but also Afghanistan star cricketers Rashid Khan and Mohammad Shahzad clicked selfies with this little kid and gave him a moment to cherish all his life.

Talking about the match, India is already in the finals. It is to see to which team, India will play a match in finals between Pakistan and Bangladesh?

Meanwhile, the star cricketer M.S. Dhoni praises Afghanistan, “Their (Afghanistan’s) cricket has improved a lot. The way they have continued from the start of the Asia Cup, it is commendable and we have enjoyed their cricket. It is one country that has risen through the ranks very well,” Dhoni said.

Talking about Indian team, he said, “I wouldn’t say we went wrong in the chase. To start off, it was like a handicap in golf. We didn’t go with a full-strength side. Not enough spinners on this wicket. The first over that a fast bowler bowls, they need to extract swing. We didn’t hit the back of a length area, and we gave away too much initially with the ball.”