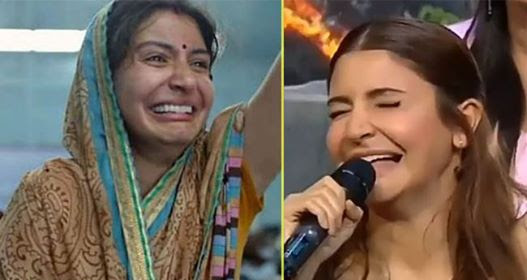 The trailer of Varun Dhawan and Anushka Sharma’s Sui Dhaaga: Made in India is liked by one and all. The trailer touched everyone’s heart and it also became a butt of jokes for Anushka Sharma.

The trailer was released in August and has received appreciation from fans and critics. Interestingly, when Anushka was recently asked about her reaction to the memes, she told a leading daily, “I thought the memes were hilarious. I kept sharing them with Varun, Sharat Katariya( director )and my friends.”

Now on popular demand, the actress was asked to recreate the similar expression which she did in the trailer. She was asked to do so on a television show as she went to promote her upcoming film Sui Dhaaga.

The show’s judge Vishal Dadlani asked Anushka about her memes circulating on the internet and even requested her to recreate the meme and enact the crying scene. The actress, being a sport, not only made her crying face once but twice.

Here are some of the memes that were doing rounds on the internet. Have a look:

“So, your new president is Donald John Trump.”
Statue of Liberty: pic.twitter.com/2fzXxxnxha

*When your crush says, she loves you but as a friend* pic.twitter.com/wT8Q6oXuDJ

Some days ago, Varun Dhawan also shared a meme of himself edited with the Grammy-award winning song Who Let the Dogs out. The actor took to Instagram to share a video of the song merged with one of his scenes from Sui Dhaaga and wrote, “Who let the dogs out #suidhaagamadeinindia. Someone sent me this couldn’t resist putting it out.”

Well, Anushka’s spirit is amazing. Do you agree?