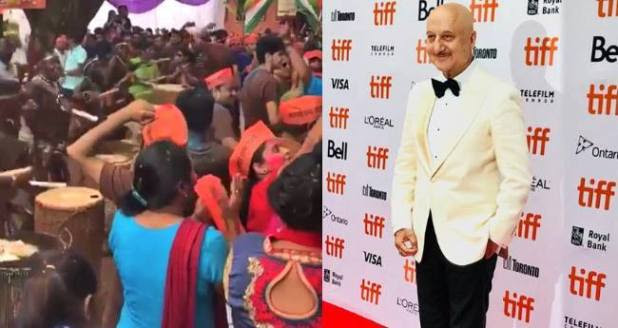 Auspicious festival of Ganesh Chaturthi is going on all over India and people are in full enthusiasm and zest to celebrate Ganpati Bappa’s day which stays maximum for 7 days. People came together and placed Lord Ganesh in their houses or at their societies. These 7 days, you can see people enjoying, dancing, singing, playing altogether. If happiness has a definition then this festive can define it. In Mumbai, Ganpati celebration is celebrated at another level.

Anupam Kher shared a video taking to his social media where people are celebrating in Uganda’s Entebbe for the Hindu festival of Lord Ganesha. Natives can be seen zestfully taking part in the festival and playing drums singing along with the slogan ‘Ganpati Bappa Morya’.

Sharing the video on his Instagram Official, Anupam Kher wrote, “This is MAGICAL. Shree Ganesh Temple in Entebbe, Uganda celebrates #GaneshUtsav with the chants of #GanpatiBappaMorya. Listen to the sound of drums and the expressions on the faces of the people who are playing them. #GanpatiBappaMorya #VibesAndEnergy”.

This is indeed a kind of magical video. Isn’t it?

As said above, Mumbaikars welcomes Lord Ganesh with another enthusiasm level and dance their heart out. Even there is the public holiday on this festive day.

Talking about Anupam Kher’s professional front, the veteran actor will be next seen playing the role of former Prime Minister Manmohan Singh in his biopic The Accidental Prime Minister. There are a few videos and pictures from the PM Manmohan Singh’s Biopic have been surfaced on the internet and they took the nation with a storm seeing Anupam’s transformations and how he skins in the character of Dr. Singh. Alongside Kher, Arjun Mathur, Ahana Kumra, German actress Suzanne Bernert, Divya Seth, and Akshay Khanna will also be seen in the film The Accidental Prime Minister, playing prominent roles of Congress’s politicians.