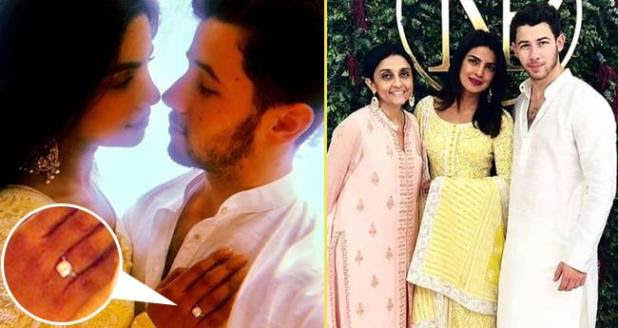 The relationship of Priyanka Chopra and Nick Jonas has become official today. The duo, after dating for several months finally decided to become partners for life. The Roka ceremony took place today morning at Priyanka’s residence in Mumbai. Nick along with his parents came down to the city to attend the engagement bash.

The pictures from today’s function are already out and the couple looks so much in love. Priyanka took to her Instagram handle and posted the picture of themselves for the first time. Making the news official with her fans, Priyanka wrote, “Taken.. With all my heart and soul..”

Nick too shared the same picture on his Instagram handle and wrote, “Future Mrs. Jonas. My heart. My love.”

Talking about their outfits, Priyanka chose to wear a lemon yellow Anarkali suit with heavy earrings. It has an embroidery all over. She kept the look simple and wore minimum make-up.

However, she flaunted her expensive diamond ring in the picture she posted. The ring is worth $200,000. Nick had proposed her with the ring on her birthday last month which they celebrated in London.

Talking about Nick, he wore a plain white Kurta and pyjama and looked dashing. We wonder that he’ll make a handsome dulha. The reports suggest that the duo will get married by September this year.

Priyanka and Nick first met at Met Gala 2017. Their relationship came into the headlines when the duo was spotted hanging out together too often. Priyanka then also accompanied Nick at his cousin’s wedding.

Later Nick too came down to Mumbai with her to meet her mother Madhu Chopra. They then also went on a vacation to Goa. Until today, they never spoke about their affair. However, they were often papped walking hand-in-hand. Priyanka used to accompany him to his concerts.

We wish them a hearty congratulation!