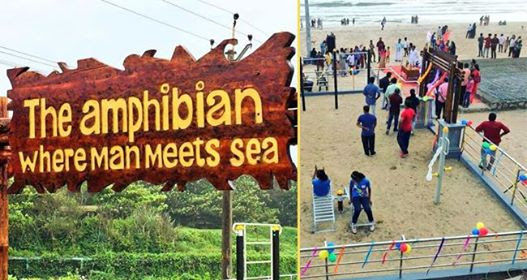 A lot of Indians love food and generally prefer to stay away from the gym but love spending time on the beautiful beach. A smart way to exercise is India’s first professional gym at a beach.

Introducing #TheAmphibian to Payyambalam Beach. An open gym right there, facing the waves, barely 150m from the sea, where you can work out anytime of the day.

A mini rock-climbing wall has also been installed as part of the gym for kids! /1 pic.twitter.com/yVw2EfZLDe

According to a 2014 report, India still spends only around 4.2% of its national GDP towards healthcare goods and services (compared to 18% by the US). A staggering 70% of the population still lives in rural areas and has no or limited access to hospitals and clinics.

According to an old report by the World Bank and National Commission’s report on Macroeconomics, only 5% of Indians are covered by health insurance policies.

India is blessed with a lot of beaches and all of them have become a tourist spot. Talking about the beach, walking in sand stimulates more than 2 lakh nerve endings on the soles of your feet. Because the ground beneath you is constantly shifting, you also use muscles in your feet you don’t use when you’re wearing shoes so you burn more calories.

Sand is a natural exfoliant, so it rubs away dead skin and lets your pores breathe – clearing away blackheads and acne. Listening to the waves crash against the shore can actually alter your brainwaves, putting you into a relaxed state, and may trigger the release of dopamine and serotonin.

Besides walking, swimming and sitting, no one had an idea of exercising like in the gym at the beach. In a recent news, Kannur’s Payyambalam beach just became the first beach in the country to introduce an open-air gym, barely 150 metres from the sea.

‘The Amphibian: Where Man Meets Sea’ is a project flagged off by Mir Mohammed Ali, the district collector of Kannur, and a self-professed ‘Aquaphile.’

The super cool gym also has a special section for children, which includes a mini rock-climbing wall!

The Amphibian was inaugurated yesterday by Ramachandran Kadanapally, the State Minister for Ports, who sportingly tried his hand at one of the exercise machines.

That is surely a cool idea to maintain health and relax at the same time. tuned to Laughing Colours for the latest news and updates.