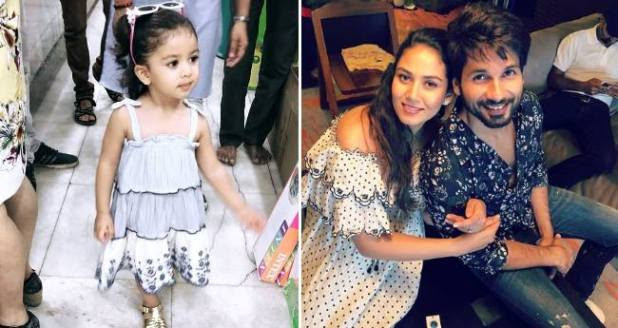 Shahid Kapoor and Mira Kapoor’s daughter Misha is one of the most popular star kids. Though Mira comes from a non-filmy background, but being married to Shahid has made her a celebrity as well. Plus, her presence on social media has made her more popular. Mira often shares cool pictures of her small and happy family, and so does Shahid. And this time, Mira shared a super cute picture of Baby Misha in her Instagram story.

In a pink capri, and open hair, Misha carried a handbag and was seen walking. Mira perfectly captioned it ‘Busy Day’ as the kiddo looked like a boss already. Have a look: Few days back, Mira had shared another cute picture of Misha in which she looked extremely stylish. The picture did justice to the fact that she is Shahid Kapoor’s daughter. There is no denying fact that Misha is one of the cutest kid in B’town and all thanks to the parents who keep on sharing such aww-dorable pictures. Misha is going to be a big sister in few months now. Shahid and Mira are expecting their second child and Mira is in her third trimester.

Shahid has been giving us some major marriage and parenthood goals as he has decided to go on a paternity leave to welcome their baby and to take care of his lovely wife. The actor had been quite busy in the shooting of upcoming film ‘Batti Gul Meter Chaalu’ alongside Shraddha Kapoor and Yami Gautam. The film will release in September. He will be taking a break after completing the first schedule of Arjun Reddy. According to a report, “Shahid’s wife is due in September, so he will take about a month’s break to be with his family, post which he will resume AR’s shoot.”