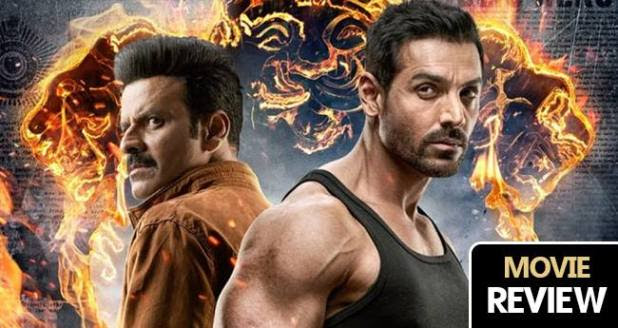 John Abraham after delivering an amazing performance in Parmanu: A Story of Pokhran is back with yet another action entertainer this Independence Day. The actor is known for doing some of the mind-blowing action films like Rocky Handsome, Force 2 among others.

John’s Satyameva Jayate trailer recevied a thumbs up from the viewers for its beautiful content which not only entertains us but also gives us a strong patriotic message.

The story of the film focusses on Virendra Kumar Singh played by John who is a saviour or an angel for the innocent and takes law into his own hands. He teaches a proper lesson to the cops who misuse the law. DCP Shivansh is the damper in his plans, who is a part of the law and amongst the minority of good cops.

Though the storyline is very mainstream or simple, John’s role has been perfectly designed matching his abilities or he is shown what he is good at. The movie is quite gripping in some parts, however, few scenes are stretched a bit which wasn’t needed.

The film apart from being a typical Bollywood masala flick has some South film industry touch with too much drama and over-the-top action sequences and some scenes which many might not like.

Apart from John, another terrific performer Manoj Bajpayee is also a part of this action-drama who play a tough cop. However, John’s starry act definitely sidelined Manoj. Also, the actor has been playing same kinds of roles in all his recent films so it kinda gets repetitive.

And just like every Bollywood flick, every action-drama and films like these have a dash of entertainment where the hero has a love interest. Well, it’s just for some extra fun and its really never needed. Aisha Sharma, who made her Bollywood debut had the same kind of role.

We got to see the pair romancing in the song and in a few scenes and it was a delight to see them together as they make a cute pair together.

One thing which was the best thing about the movie and is the reprised version of Dilbar featuring Nora Fatehi. The song took the internet by storm and Nora’s dance moves are definitely drool-worthy.

The movie will be loved by the die-hard John fans and for the action lovers. With a small social message and loads of entertainment, Satyameva Jayate is a one time watch.

The movie is directed by Milap Zaveri who has previously directed movies like Grand Masti, Kya Kool Hai Hum 3 among others.

Published by Harmisha Chauhan on 15 Aug 2018