Saif And Kareena Take Taimur For A Playdate With Sister Inaaya 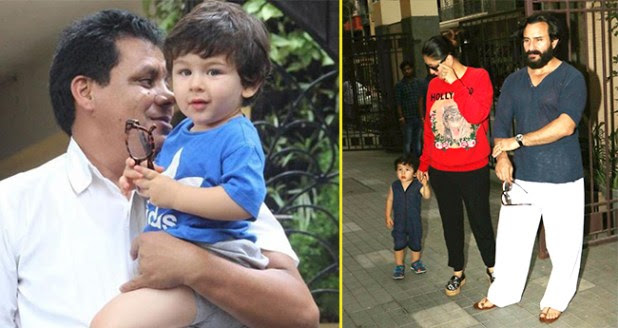 Celebrity mom and dad Kareena Kapoor Khan and Saif Ali Khan’s little bundle of joy Taimur Ali Khan is one package of good looks and cuteness, and every time his photo/video recording hits the webs, he looks delightful than the last time.

The super-adorable munchkin is full of smiles for media whenever they met him, and the chote Nawab never fails to amuse his admirers with his little glittery expressions and antics.

On August 2, 2018, Soha took Inaaya to Saif and Kareena’s place for a special play date with cute bhaiya Taimur.

And the very next day, Saifeens took their cutie pie to Soha’s house for a play date with Inaaya.

When daddy Saif was questioned on Taimur’s bonding with Inaaya, he answered, “They hang out here at home. She is very small and delicate and he is a ruffian but we have a lot of people around so we don’t need to be worried. But Taimur is a gunda. I hope he doesn’t pull her hair (laughs).”

Kareena also told about the continuous media attention his little champ is getting, and stated that she is really worried and she always wanted him to grow as a normal kid.

“No, I think he’s just wondering what they’re doing, why they’re calling out his name! He’s quite bright and aware as a child. But I’m worried. I don’t want him to get used to this kind of attention. I’m protective like any mother would be.”

On work-life balance, Kareena answered, “Movies will go on, but I will do one film at a time. My husband isn’t a businessman who comes home at 6 pm. He is an actor too, and between us, we must balance our time out for Taimur. We have decided we’ll do one film each — I did Veere Di Wedding, now he is doing Navdeep’s [Singh] film. After he finishes his commitments by November, I will start my next. So, I can kick it off in January.”