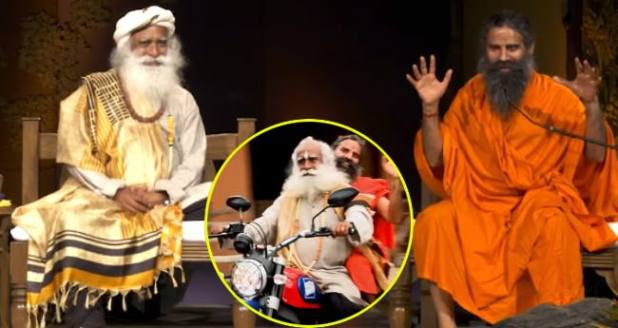 Baba Ramdev and Sadhguru are the two well-known yoga gurus India have. Baba Ramdev and co-founder of Patanjali Ayurveda Ltd seems to have a fun time with Sadhguru. They met at Isha Yoga Center, which promotes yoga, in Coimbatore, Tamil Nadu. While Ramdev like to bend and twist his body, Sadhguru is a free-spirited man who takes on bends and twists on roads. Yes, a few days back people had witnessed something very different that we did not see coming and this act went viral on the social media.

While they were on a tour, Sadhguru took Ramdev on a bike ride through the scenic foothills of Velliangiri, on the outskirts of Coimbatore in the Western Ghats. The spiritual leaders were joined by a group of bikers as Sadhguru takes Baba Ramdev on a tour of the Yoga Center.

Sadhguru’s favorite bike is Ducati on which he took Ramdev for a ride. He was looking all young spirited and excited while riding.

Soon Sadhguru’s YouTube channel shared a pretty cool video “Biker dudes” and also shared it on his Twitter official and captioned it as, “A delight to have @yogrishiramdev and @Ach_Balkrishna, the duo who revolutionized indigenous industries & brought #Yoga & Ayurveda into lives of a large number of people – at #IshaYogaCenter. -Sg.”

A delight to have @yogrishiramdev and @Ach_Balkrishna, duo who revolutionized indigenous industries & brought #Yoga & Ayurveda into lives of a large number of people – at #IshaYogaCenter. -Sg pic.twitter.com/8LxJacvgMf

While riding on the bike, they also passed the famous Adiyogi Shiva (Lord Shiva) statue which is recognized by the Guinness World Records as the ‘Largest Bust Sculpture’ in the world. The statue was designed by Sadhguru and weighs around 500 tonnes. The statue is located at the Isha Yoga Center which promotes yoga. Prime Minister Narendra Modi had unveiled the 112-feet Shiva statue on Mahashivaratri in 2017.

In June, Sadhguru was seen dancing with Bollywood actor Ranveer Singh at IIM Bangalore for their alumni event, IIMBue. Matching the energy with Ranveer Singh, Sadhguru was praised on social media by many people for having such a young heart. Baba Ramdev had also won against Ranveer Singh in a fun dance battle on the Agenda Aaj Tak 2016 stage.