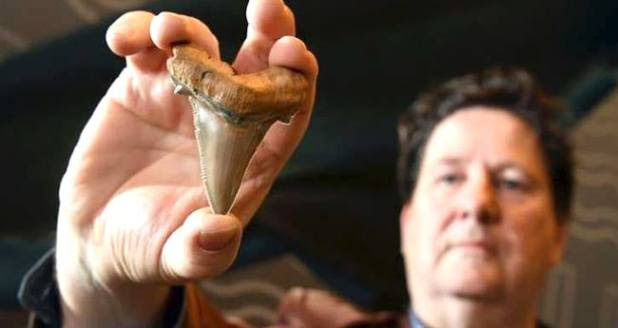 A rare set of teeth from a giant ancient shark has been found on a beach in Australia. An amateur enthusiast was walking along the beach in an area known as a fossil hotspot at Jan Juc, on the country’s famous Great Ocean Road some 100 kilometres (60 miles) from Melbourne when the keen eyed man found the rare teeth.

He said, “I was walking along the beach looking for fossils, turned and saw this shining glint in a boulder and saw a quarter of the tooth exposed. I was immediately excited, it was just perfect and I knew it was an important find that needed to be shared with people.” Erich Fitzgerald, senior curator of vertebrate palaeontology confirmed that the 2.7 inch (seven centimetre) long teeth is of an extinct shark (Carcharocles angustidens) which lived 25 million years ago.  He said, “These teeth are of international significance, as they represent one of just three associated groupings of Carcharocles angustidens teeth in the world, and the very first set to ever be discovered in Australia.”

“If you think about how long we’ve been looking for fossils around the world as a civilization — which is maybe 200 years — in (that time) we have found just three (sets of) fossils of this kind on the entire planet, and this most recent find from Australia is one of those three,” he told CNN.

It was just one of the multiple teeth Mullaly found in 2015. And 3 years later, scientists confirmed that the teeth are all about 25 million years old and belong to an ancient shark. He explained that till date almost all the fossils of sharks found worldwide were single teeth and it is rare to find multiple associated teeth from the same shark.