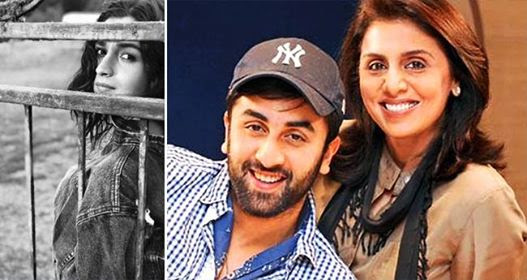 The much talked about couple Ranbir Kapoor and Alia Bhatt are busy shooting for their film in Bulgaria. In between they find the time and post pictures on social media. Amongst all this, they also get to spend together and create memories which they will cherish for their life.

As we all know they are in Bulgaria and shooting for their film Brahmastra.Alia took to Instagram to share a picture that has been clicked by Ranbir.

Alia Bhatt and Ranbir Kapoor have been creating sparks everywhere they go since the time Ranbir confirmed about them dating. The two will be seen sharing the screen space for the first time in Brahmastra too.

While in Bulgaria, Alia has become Ranbir’s muse. He has been clicking her pictures all this while.

Alia shared a picture on Instagram which has been clicked by Ranbir. And surprisingly, Neetu never fails to comment on it.

Alia captioned the image as, “& into the forest I go,to lose my mind and find my soul (amaze photographer – RK).” To this, mom Neetu Kapoor wrote, “Fab pic of you by RK.”

This is the image:

Ranbir Kapoor had admitted in an interview, that he is dating Alia Bhatt and had said that their relationship is ‘too new’ and it needs ‘breathing space.’ While promoting his last release Sanju, Ranbir had credited Alia for bringing positivity in his life. He had also said that he wants to give his relationship with Alia some dignity.

Before heading to Bulgaria, Ranbir Kapoor met Alia Bhatt’s dad Mahesh Bhatt at her residence. In one of the interviews, Rishi Kapoor said that it’s high time that Ranbir gets married.

Are you guys excited too for their upcoming movie?