Punbajis throw money while dancing at a wedding, foreigners end up picking it 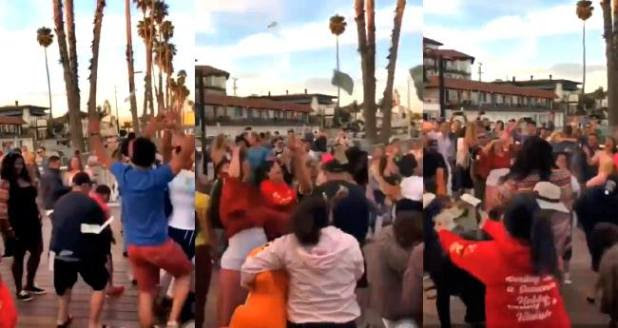 Indian continents are known for many things and one of them is for its wealthy weddings and the many surpluses we indulge in during our Shaadis. Not to forget Indian’s obsession with the Band, Baaja, and Baarat. Any wedding in India can’t happen without it even if someone wants a simple wedding- there will be at least one or two Band Wale.

We all have witnessed that one guy in the wedding who went on dancing in Baarat (where the groom comes on a horse with family members and friends dancing around) not even just Bollywood dance the famous Naagin Dance. That one guy lit the party though who was not even in his senses while dancing.

We wonder why Baraati Dance is one form yet! (wink)

Remember Vidhya Balan’s dialogue “The entertainment one”, an Indian wedding cannot be done without three things Alcohol, Chicken, and Dance. Not to forget the ritual or Rasam of throwing money while dancing. There is one uncle at the wedding who just waste the money like water.

Recently, a video went viral on the social media where foreigners made it to the trending list. In the video, a bunch of Punjabi people are all drunk and getting high on loud music and foreigners are taking the party to the next level where Punjabi boys throwing money that too dollars in the air while foreigners quickly coming to grab it.

Now here we can understand that this is a proper new thing for the outsiders but don’t ever pick money in any wedding, you guys…

Here the video shared by a Twitter user who wrote a caption which reads, “Punjabis throwing dollars while dancing and firangis picking them up

Punjabis throwing dollars while dancing and firangis picking them up

Haha! And always twitteratis are quick to response on the same. Here are some reactions have a look:

For years they used us as their entertainment, now it’s our turn.

Talking about weddings, you can see two types of the wedding- South Indian with all the pooja and hawans and the other is Punjabi weddings which are lit or enduring. However, these days most of the weddings follow the proper 3 or 5 days functions. So do you have such moments, share it with us and let everyone laugh?