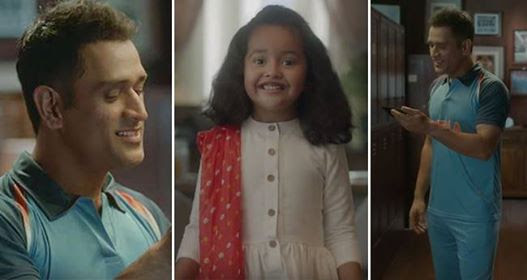 Former-Indian skipper Mahendra Singh Dhoni is one of the most valuable and skilled cricketers in the world. He was called ‘Captain Cool’ when he was a captain. He is also called as the best finisher in cricketer. The wicket-keeper batsman has always brought hope for the team in tough matches and has always managed to win matches. The heartfelt story follows a little girl’s efforts to learn the patriotic song ‘Sare Jahan se Achha’ and it ends with another sweet surprise — her endearing performance with MS Dhoni singing along, leaving us all feeling proudly Indian.

The advertisement is a big step in this context was their novel initiative ‘Design in India’, an inspiration from ‘Make in India’.

Sumanto Chattopadhyay, Chairman & Chief Creative Officer, Soho Square India, said, “I’ve been singing ‘Sare Jahan se Achha’ since the day of the shoot. I think this sweet little film will get many other Indians to do the same. A good thing to happen on Independence Day or any other day.” Sunil Raina, President Lava International Ltd, said, “We take immense pride in being an Indian mobile handset brand. India is at the heart of everything we do at Lava and we are committed to offering valuable products to our consumers. Over the years, we have been building capabilities within India in product design & manufacturing – in order to make valuable technologies accessible and provide reliable products to our customers. Today, we are proud of being the only brand to have a complete end to end control on product value chain within India, complemented by our robust distribution network and speedy customer service. Through Proudly Indian campaign, we wish to share our pride of being a truly Indian company with our fellow countrymen. This campaign is a unique celebration of our independence and tribute to the nation.” MS Dhoni is the most admired sports personality in India. According to a recent survey, Dhoni finished ahead of current India skipper Virat Kohli and legendary batsman Sachin Tendulkar. Dhoni will now be seen in action in the Asia Cup which will be held from September 15.