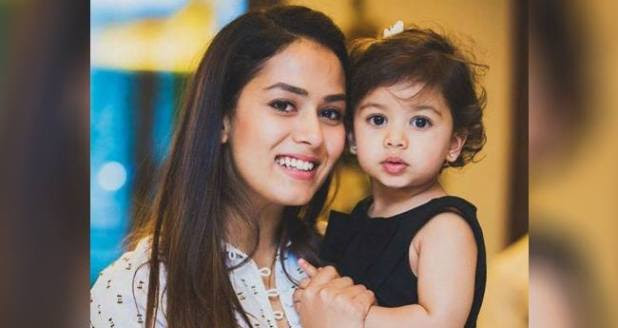 Shahid Kapoor and Mira Rajput are expecting their second child and these days Mira is also quite active on the social media. Recently, all happy and excited mommy Mira opened up about how her 2 years old daughter Misha is responding to her pregnancy to a leading magazine.

Mother of a daughter Mira revealed, “Being able to bring a life into this world, feel it grow inside, and being able to connect with the baby before it has actually even arrived is surreal. And this time it’s been so interesting to see how Misha has been through the entire process. She knows there is a baby inside and she says, ‘Hi Baby!’ every day to my tummy”.

Last year Shahid also said in an interview Mira was keen on adding to the brood at the earliest. “She wants to flip the norm, get the kids to a certain age and then be free to do what she likes,” he had said.

Mira and Shahid both revealed occasionally that they both came closer when Mira was pregnant with her first child Misha. The two had an arranged marriage and fell in love only during her first pregnancy. It is said that if a mother is pregnant a father too felt the same although a woman is carrying her child.

Shahid felt the same, in an event he had said, “When she was in labour, I held my breath. At one point, I got dizzy and she whacked me and said, ‘Why are you getting dizzy? I’m doing all the work here”.

Talking about the actor’s professional front, he will be seen next seen in Shree Narayan Singh’s Batti Gul Meter Chalu. The film also stars Shraddha Kapoor, Divyendu Sharma and Yami Gautam, revolves around the issue of power shortage and huge electricity bills. It is slated to release on 21 September.

Shahid was last seen in Bhansali’s Padmavat which was a blockbuster at the box office and the actor played his role efficiently and effortlessly alongside Deepika Padukone and Ranveer Singh.