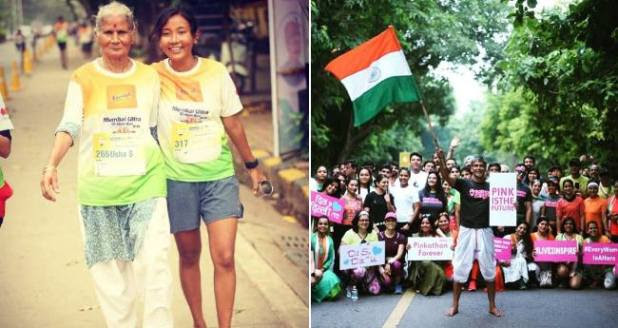 Milind Soman comes first when talking about fitness and supermodels. He is still a crush for many girls out there with his chiseled physique and fitness and of course his smile. At the age 52, he still inspires many of us by remaining fit and encouraging it all over.

As we all know Milind loves running and on this Independence Day, Milind did it again. Right, he ran. On 15th August, he ran 72 kilometers in Delhi which finished at India Gate to celebrate independence. His wife Ankita Konwar accompanied him in the run. Along with it, he urges everyone to remain fit and healthy. A lot of people joined Milind in the run organized by United Sisters Foundation to promote the sixth edition of Bajaj Electricals Pinkathon Delhi.

Milind was quoted by the TOI- a leading daily, “People mark August 15 in their own way. I thought, why not celebrate it in a way that would make people fitter? To me, running is the best way to do that.”

He told IANS, “I would like to wish fellow Indians on India’s 72nd Independence Day and urge people to take their health and fitness seriously.”

Further adding, he said, “Running 72 km is not just to celebrate our Independence Day but also to promote the message of exercising our freedom to live in a healthy way by making the right choices of spending 30 – 40 minutes daily on self, clean eating, being active and challenging your physical and mental abilities to lead a fit life. Age should not be a limiting factor. We want a large number of people especially women to take up running and adopt fitness in their way of life,” he said.

“He also wants to change the mindset of many women who shy away from running and told them to run even in Sarees by saying, “We want to change the mindset of women. We want women to run in whatever they wear and the way they are dressed, be it saris, salwar kameez or even the hijabs. Clothes should not become a deterrent to women’s fitness. The idea is to inculcate the fitness habit in their comfort wear. This run emphasized the fact that a mere element such as dressing can stop no woman from striving towards fitness.”

All we can say is he is a real inspiration and youngsters should learn from him.