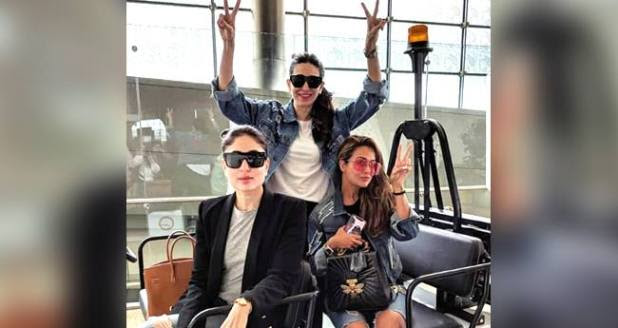 Bollywood’s popular actress Kareena Kapoor Khan is very much in demand these days. Apart from signing some great projects, there are many people who want to work with her. Be it brand endorsements or inviting her for a store launch, the actress is pretty popular.

Kareena had to fly to Dubai for a store launch and the actress along with her work commitments decided to have some extra fun with her girl gang. The diva was accompanied by her group of best friends Amrita Arora and her sister Karisma Kapoor. Kareena’s manager Poonam Damania was also present.

The girl gang was clicked at the Mumbai airport as they were leaving the city for Dubai.

Bebo, who attended the store launch looked ravishing as usual as she posed for a click with a mesmerizing view of Dubai.

Kareena was seen with her girls having fun post the store launch. Karisma and Amrita shared some pictures on the social media.  Kareena’s makeup artist Mallika Bhat is also along with the girls. On the work front, Kareena’s career is going sky high as she has some exciting projects lined up. Karan Johar announced one of the biggest projects which will be a period-drama Takht with an ensemble cast including Anil Kapoor, Vicky Kaushal, Ranveer Singh, Janhvi Kapoor and Bhumi Pednekar. She will also begin shooting for Good News with Akshay Kumar, Diljit Dosanjh, and Kiara Advani soon.

Kareena has been constantly working post-Taimur’s birth in 2016. The actress was seen making public appearances and also signing a lot of brand endorsements. Kareena’s first film post delivery was Veere Di Wedding and it was a huge hit at the box-office. The film also starred Sonam Kapoor, Swara Bhasker and Shikha Talsania in the lead roles.

Published by Harmisha Chauhan on 19 Aug 2018