I Have Lost My Father All Over Again, Says Lata Mangeshkar On Atal Bihari Vajpayee 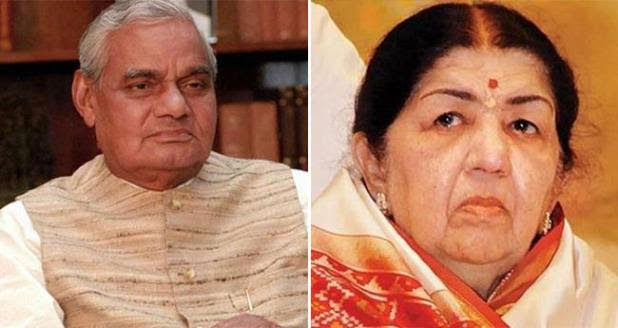 Singing sensation and legend Lata Mangeshkar has expressed grief after nation lost its gem Atal Bihari Vajpayee Ji. She said, “He was like my father. He called me Beti. I called him Dadda. I feel I’ve lost my father all over again.”

She further said that his persuasive oratorical power and his massive love for arts always reminded her of her won father Pandit Dinanath Mangeshkar. She recalled the old memories and mentioned the time when in 2014 she was given an opportunity to compose an album which was dedicated to Atal Ji’s poems. She mentioned that time is unforgettable for her. The album named ‘Antarnaad’ was released at Atal Ji’s residence in Delhi. She further said that she was hardly impressed by any other political leader. Lata Ji said that he was a visionary and our nation witnessed massive progress when he was in power. She also said that he contributed a lot to improve India-Pakistan relations.

Lata ji said that India has lost much more than a Bharat Ratna. She said that she still listens to his speeches on mobile phone as his speeches are no less than an art work. Bollywood legend Amitabh Bachchan wrote, “His oratory powers were unmatched and the usage of words exemplary. They were filled with the power of pronunciation. The rendition of the word was enough to give it meaning… One did not need to understand the language, that was his brilliance. Some of his public speeches and ones done in the Houses of Parliament are testimony. A poet, a writer, a politician, a Prime Minister… an extremely rare human.” We lost Atal Bihari Vajpayee Ji on 16 Aug. He was 93 year old and was facing several health issues since a decade. Born in 1924, Atal Ji had joined politics at the age of 18 during Mahatma Gandhi’s Quit India Movement. He was the 10th Prime Minister of India. His first term lasted for 13 days in 1996 and then from 1998 to 2004. He was the leader of the people and for the people who worked for the betterment of the citizens of India, and for the nation in whole. He was a great orator, and a poet.