That breaks a growth streak that stretches back more than a decade and, more crucially, it comes at a time of relative crisis for Tencent. The company became Asia’s first $500 billion tech business last November, but it has endured a torrid 2018 with its share price slipping more than 25 percent since a January high — controversy around a banned game knocked it down further this week. 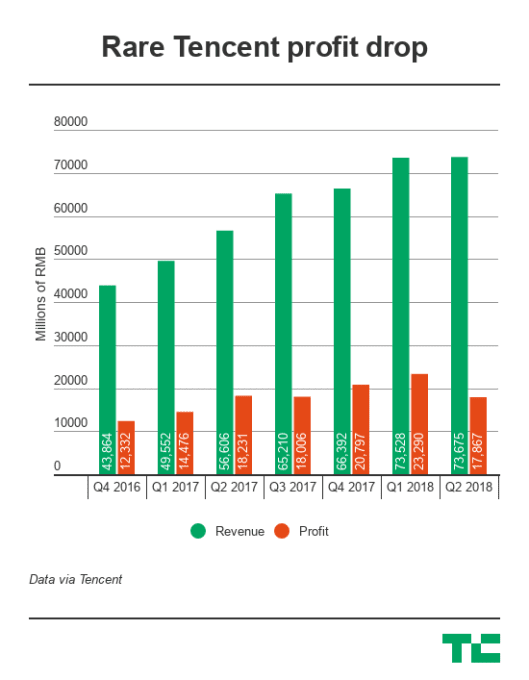 Gaming has always been Tencent’s strongest point — it helped the firm log a 60 percent profit jump in the previous quarter — but there are concerns.

Sources told Bloomberg that there has been a freeze in awarding game licenses in China as part of changing within the agency that approves them. That’s impacted mobile, PC and console and it has particularly rattled Tencent, which is one of the major players.

Not only did China clamp down on popular title Monster Hunt, but Tencent’s financial results show some slowing. Its PC gaming business recorded a five percent yearly drop to 12.9 billion RMB. The smartphone games business — which includes smash hits PUBG and Fortnite — posted 19 percent year-on-year growth to hit sales of 17.6 billion RMB, but that was done 19 percent on that previous blockbuster quarter.

“In China, DAU for our smartphone games grew at a double-digit rate year-on-year, but monetization per user declined as users shifted time to non-monetised tactical tournament games,” Tencent said in a filing.

The company has vowed to “reinvigorate” the mobile games until through a mix of more monetizing, deeper engagement and widening its selection on the market. The firm also said it will push its successful China games overseas, presumably into other parts of Asia where Tencent has seen traction and revenue before.

Those strategies will take some time to generate results, but for now the company said it is happy with user engagement, and particularly the daily gamer numbers.

That hasn’t impressed investors, who sent the stock price lower following the announcement of these financials.