#BachceFitTohDeshFit, Rahyl Deskhmukh’s New Fitness Challenge As He Passes It On To Other Star Kids 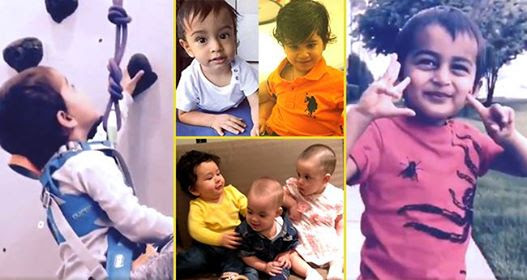 Initially, the challenge of #HumFitTohIndiaFit was started by the sports minister Raghvendra Rathore. This was carried on by others as they posted a video of them doing a workout and challenging others alongside.

The entire #HumFitTohIndiaFit campaign was ignited by the Sports Minister Rajyavardhan Singh Rathore who posted a video of himself on social media, doing push-ups in his office. He urged his followers on Twitter to post pictures and videos of them engaged in activities to keep themselves fit. Through the video, he also put out a #FitnessChallenge to Hrithik Roshan, Virat Kohli and Saina Nehwal. And, in true Indian political tradition, Rathore thanked Prime Minister Modi for inspiring him to stay fit.

This time around it’s the kids who have taken up this challenge and have challenged it by tagging other kids too.

Genelia took to her Twitter and shared this video. Have a look:

Here is the video:

The IPL final at Wankhede stadium last Sunday may itself have lacked fizz and nail-biting excitement, despite Shane Watson’s gritty century, but the highlight on television was surely a carefully crafted 120-seconds long #HumFitTohIndiaFit commercial with a voice-over by the Hon’ble Prime Minister Shri Narendra Modi interspersed with footage of him as well as famous celebrities — politicians, sportspersons and Bollywood stars — promoting a fitter, healthier India. The commercial which ran at least 10 times during the match must have been a last minute super bonanza for the broadcaster, Star TV, bringing in at least Rs 25 crore of unexpected revenues.

Rahyl has challenged Lakshya who is Tusshar Kapoor’s son, Taimur Ali Khan who is Kareena and Saif’s beloved kid, Ahil who is Ayush and Arpita Sharma’s son, Roohi and Yash who are Karan Johar’s children.

So, are you kids also ready to take up the fitness challenge?

Let us know in the comment section below as to what would you do plan to do.