Atal Ji shared an incident about Pt. Nehru’s lost picture in his speech at Parliament 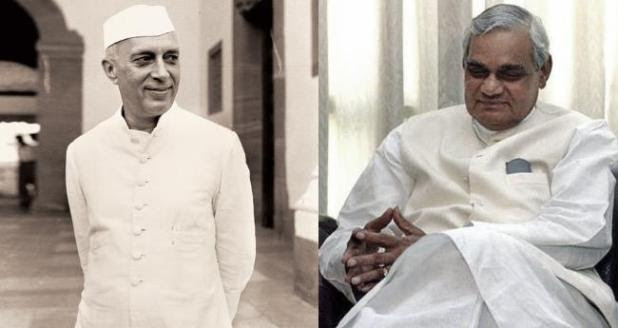 Once a picture of India’s first prime minister Jawaharlal Nehru gone missing from the South Block in the late 70’s but was restored by then’s foreign minister, Atal Bihari Vajpayee’s intervene.

Former Prime Minister Atal Bihari Vajpayee shared this incident in his speech at the Parliament where he praised first PM Nehru’s ability to take criticism happily. Atal had said,”Friends in Congress may not believe this, but a portrait of Nehru would hang in South Block. I would see it whenever I passed by”.

He said, “At that time, I was new, and would sit back in the House. Sometime to get an opportunity to speak, I also would have to stage a walk out,” he had recalled.”Then I made a place for myself and moved ahead. And, when I became the foreign minister, I saw that the portrait was missing from the gallery”. Getting applause in the house he said, “I then asked where did it (portrait) go? I got no reply. That portrait was restored.”

In his speech, Vajpayee then asked if people respected such sentiments. “Should such sentiments germinate? (Kya is bhavna ki kadra hai? Kya is desh mey ye bhavna panpe?)” “It is not that there were no difference of opinion between us. And, it would surface seriously during discussions,” he said.

Further adding he had said, “Once I had told Panditji that his personality was mixed in nature and that there was both a (Winston) Churchill and a (Neville) Chamberlain in him,” the veteran politician said, adding that Nehru was “not upset” at that.”In the evening, I met him at a banquet, and he (Nehru) told me it was a solid speech and walked away smiling. Today, to do such criticism is to invite enmity. People will stop talking.”

Former Prime Minister Atal Bihari Vajpayee is a great political leader and he inspired everyone with his great political knowledge. Atal Bihari Vajpayee has a vast knowledge of poetry, literature, and films even after he is a politician. He served the nation three times as the Prime Minister, first for a term of 13 days in 1996, for 13 months from 1998 to 1999, and then from 1999 to 2004.