Apart from being an actor, Arjun Kapoor could be an amazing photographer too 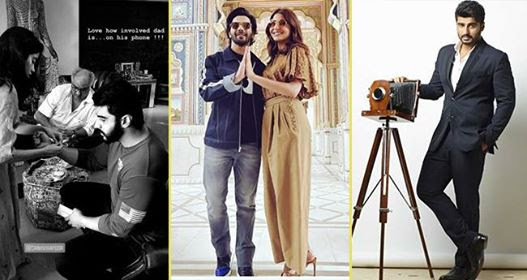 Arjun Kapoor made us laugh till our belly started aching in Anees Bazmee’s Mubarakan. At that time, it was not known to us that he as an actor can be funny and not just in reel-life but in real life, too.

Arjun Kapoor posted a series of Raksha Bandhan posts on Instagram and he did bring that smile on our face.

In one such family picture of the Kapoor khandan, where everyone from Anil Kapoor, Harshvardhan Kapoor, Sanjay Kapoor to Janhvi Kapoor, Khushi Kapoor and others are happily posing for the camera, Arjun decided to tease his Anil chachu who is seen wearing sunglasses. Moving on, the chote chote bhaiyon ke bade bhaiya i.e. Arjun Kapoor, decided to mock his siblings and post a picture wherein he looks the best (that’s what he claims and we don’t mind agreeing with him) because clearly, others are posing for some other camera.

Arjun wrote, “I have specifically chosen this one because I look the best in this one!!!” Well, don’t we all do this to our cousins and friends, we bet you’ll agree! But in his next post, Arjun takes a dig at himself by posting a major throwback picture with Anshula and let’s be honest, his sartorial choices are too much to handle, here. While baby Arjun has a peacock on his shoulder, and a yellow fanny pack, what caught our attention is his epic caption.

In what looks like a Rakhi post dedicated to Anshula, Arjun writes, “I have a parrot on my shoulder & guess what she’s confused by !!! My fashion choices….‪Ya I’m sorry that yellow Fanny pack is mine & you ain’t getting it no matter how hard you stare !!! @anshulakapoor, happy rakhi to you !!! ‪You’re lucky you have such an amazingly warm, genuine, funny cool, sorted & fashion forward brother !!! Ya and you’re not a shabby sister yourself too (actually you’re the best) !!! #findingfanny literally.”

Then comes a barrage of Insta stories which we couldn’t avoid. Who likes to get clicked while eating but Arjun posted a picture of his behena Khushi while eating a French toast and captioned, “she doesn’t care about Rakhi, French toast is bae for life.” Khushi, you better have a comeback to this girl! But the highlight of the Instagram stories was when Arjun didn’t spare his father and posted a picture where Janhvi is tying rakhi to Arjun and daddy Boney Kapoor was merrily involved in his phone. That’s no good, sir! He writes, “Love how involved dad is on his phone.” And then finally, after entertaining us enough on Rakhi, Arjun takes off to Nepal for the shoot of his next film titled India’s Most Wanted. But he doesn’t disappoint us here either, because even in the wee hours of the morning, Arjun has his funny side wide awake! He channelises his creativity and posts a funny caption for his fans as he writes, “The road less travelled… Time to disappear for #India’sMostWanted!!!…….” Well, please don’t disappear Arjun cause we need more of you on Instagram.