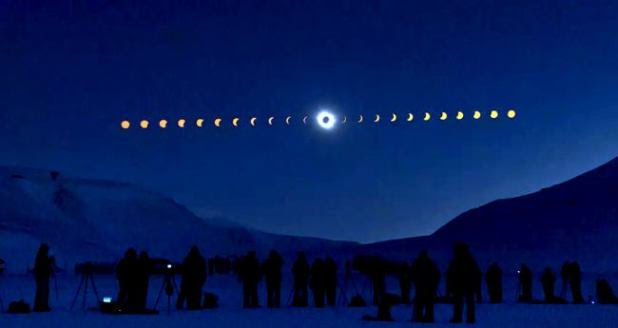 On August 11, a partial solar eclipse will take place which will be visible in the early hours of the day and is expected to be seen in the Northern Hemisphere. It will remain for only  3 hours and 30 mins. So what is a partial solar eclipse?

In the case of a total lunar eclipse, the Earth’s shadow is large enough to block sunlight from reaching the Moon and that’s how it creates a shadow on the moon. On the other hand, when the Moon covers the Sun, it is called a total solar eclipse.

A partial solar eclipse is when the Moon covers half or some part of the Sun. This could then lead to the Sun appearing as a crescent, or as a disk with a hollow center for some duration of the eclipse.

The Eclipse image will differ from location to location on the Earth, as well as the precise alignment of all three celestial bodies (sun, moon, and earth).

Where and when the half eclipse will be visible or seen?

Due to the small size of the moon, it won’t cover the whole sun but few parts will be covered and as the earth rotates it will expose a limited area to the effects. According to a leading daily, “a Goddard Space Flight Centre (GSFC) map created by NASA to trace the path of this eclipse shows that the partial solar eclipse on August 11 will be at its greatest over the eastern reaches of Siberia. This also shows that over the North Pole, observers will be able to view over 65 percent of the eclipse. The partial solar eclipse will begin from around 9.02am GMT (1.32 pm IST), and will play out over the skies of North America and Greenland. The entire event will last till 12.32 pm GMT (5.02 pm IST). The previous partial solar eclipse, which took place on July 13, was only visible in parts of Antarctica, Australia, and New Zealand.”

How to watch it:

Even if the partial solar eclipse is not visible in India, it is likely that the event could be live-streamed by an observatory or space agency. For those observers who will witness the eclipse first hand, it is worth noting that it is unsafe to observe any solar eclipse due to the intensity of the radiation, and the possible exposure to ultraviolet or infrared light. Therefore, the partial solar eclipse can be caught using glasses having special filters, or through a pinhole camera.