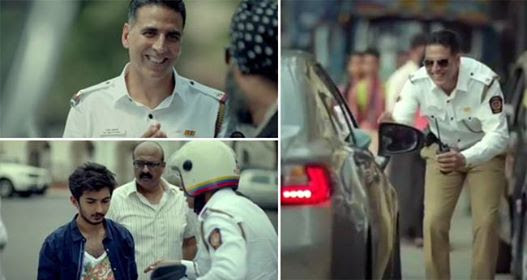 Akshay Kumar is the Khiladi of Bollywood as we all know. He does meaningful cinema and doesn’t pick crappy movies.

Akshay Kumar, the actor who is famous for doing films based on social issues, patriotic and biopics is coming once again with the film titled as Gold. The film is based on India’s first gold medal win as a free nation in 1948. Well, apart from films on social issues, he has a lot of social work to his credit.

So recently, the actor took to his Instagram handle and posted videos. In the videos, he gives a social message that tells us how we neglect traffic and safety rules which armeantts for the good of the common public.

However, people try to neglect it and do what we wish to do which is a wrong move.

HAVE A LOOK AT THE VIDEOS:

This is the first video posted by Akshay Kumar:

It is always better to be safe than sorry. Follow traffic rules for your own and others safety kyunki road kisi ke baap ki nahi hai.
#SadakSurakshaJeevanRaksha

Have a look at the video yourself:

This is the second video posted by Akshay Kumar:

This is the third video posted by Akshay Kumar:

Take a look at the video yourself:

But, is Akshay is stereotyped doing only films based on which causes? There is a lot of talks over his choice of projects. And, when he asked about it, he said, “I hate getting tagged. I don’t like people telling me that ‘He does good action or he keeps doing patriotic stuff’. I feel suffocated when they try to put me in a corner, I feel like running away from it. I hate it. That’s why I’m doing films like Housefull 4, Hera Pheri 3, Kesari, Good News and a horror-comedy.”

Like some film, again his upcoming film will release on Independent Day. He also cleared all the speculations about the choice of his films and said, “I don’t do patriotic films to prove a point, I do it because the stories are so beautiful… I watched ‘Gold’ for the second time last night and I was blown away. We knew that we were making a sports drama but we didn’t think it would turn out to be such a commercial film.”

Akshay is not believed to do only one or two films in the year, as per he said it took only a month or two to complete a film. So, he does multiple films,”I never find it difficult to switch characters. Once the costume is off, and the film is over, I move to the next. I am not one of those who locks themselves in a room for a month to prepare for a role. I can’t do that. People who talk about the in-depth process of getting into the skin of the character, I think, are lying. If the look is right, 70 per cent of the job is done.”

Well, we hope you learn something from this and follow the message given by the actor himself.