Scaling startups are setting up secondary hubs in these cities

More posts by this contributor

America’s mayors have spent the past nine months tripping over each other to curry favor with Amazon.com in its high-profile search for a second headquarters.

More quietly, however, a similar story has been playing out in startup-land. Many of the most valuable venture-backed companies are venturing outside their high-cost headquarters and setting up secondary hubs in smaller cities.

Where are they going? Nashville is pretty popular. So is Phoenix. Portland and Raleigh also are seeing some jobs. A number of companies also have a high number of remote offerings, seeking candidates with coveted skills who don’t want to relocate.

Those are some of the findings from a Crunchbase News analysis of the geographic hiring practices of U.S. unicorns. Since most of these companies are based in high-cost locations, like the San Francisco Bay Area, Boston and New York, we were looking to see if there is a pattern of setting up offices in smaller, cheaper cities. (For more on survey technique, see Methodology section below.)

Here is a look at some of the hotspots.

One surprise finding was the prominence of Nashville among secondary locations for startup offices.

We found at least four unicorns scaling up Nashville offices, plus another three with growing operations in or around other Tennessee cities. Here are some of the Tennessee-loving startups: 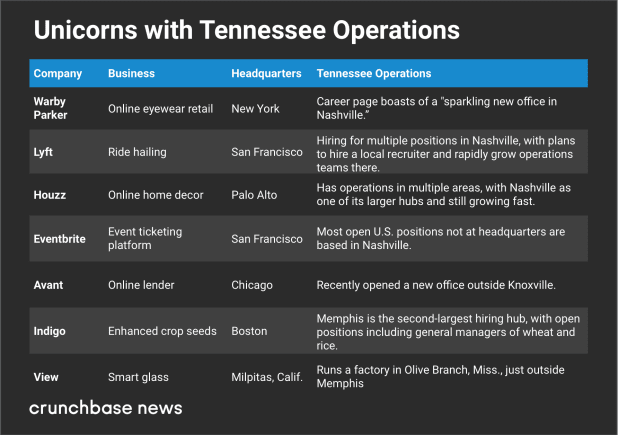 When we referred to Nashville’s popularity with unicorns as surprising, that was largely because the city isn’t known as a major hub for tech startups or venture funding. That said, it has a lot of attributes that make for a practical and desirable location for a secondary office.

Nashville’s attractions include high quality of life ratings, a growing population and economy, mild climate and lots of live music. Home prices and overall cost of living are also still far below Silicon Valley and New York, even though the Nashville real estate market has been on a tear for the past several years. An added perk for workers: Tennessee has no income tax on wages.

Phoenix is another popular pick for startup offices, particularly West Coast companies seeking a lower-cost hub for customer service and other operations that require a large staff.

In the chart below, we look at five unicorns with significant staffing in the desert city: 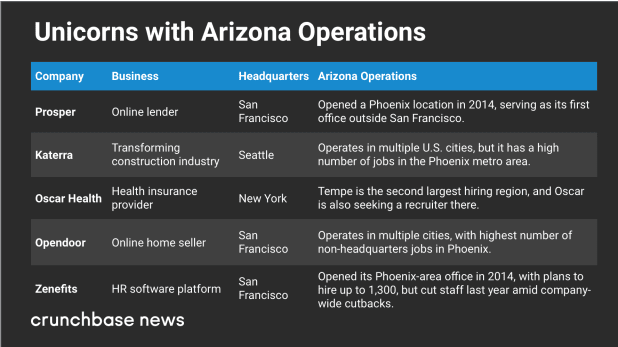 Affordability, ease of expansion and a large employable population look like big factors in Phoenix’s appeal. Homes and overall cost of living are a lot cheaper than the big coastal cities. And there’s plenty of room to sprawl.

One article about a new office opening also cited low job turnover rates as an attractive Phoenix-area attribute, which is an interesting notion. Startup hubs like San Francisco and New York see a lot of job-hopping, particularly for people with in-demand skill sets. Scaling companies may be looking for people who measure their job tenure in years rather than months.

Those aren’t the only places

Nashville and Phoenix aren’t the only hotspots for unicorns setting up secondary offices. Many other cities are also seeing some scaling startup activity.

Let’s start with North Carolina. The Research Triangle region is known for having a lot of STEM grads, so it makes sense that deep tech companies headquartered elsewhere might still want a local base. One such company is cybersecurity unicorn Tanium, which has a lot of technical job openings in the area. Another is Docker, developer of software containerization technology, which has open positions in Raleigh.

The Orlando metro area stood out mostly due to Robinhood, the zero-fee stock and crypto trading platform that recently hit the $5 billion valuation mark. The Silicon Valley-based company has a significant number of open positions in Lake Mary, an Orlando suburb, including HR and compliance jobs.

Anywhere with a screen

But you don’t have to be anywhere in particular to score jobs at many fast-growing startups. A lot of unicorns have a high number of remote positions, including specialized technical roles that may be hard to fill locally.

GitHub, which makes tools developers can use to collaborate remotely on projects, does a particularly good job of practicing what it codes. A notable number of engineering jobs open at the San Francisco-based company are available to remote workers, and other departments also have some openings for telecommuters.

Others with a smattering of remote openings include Silicon Valley-based cybersecurity provider CrowdStrike, enterprise software developer Apttus and also Docker.

Not everyone is doing it

Of course, not every unicorn is opening large secondary offices. Many prefer to keep staff closer to home base, seeking to lure employees with chic workplaces and lavish perks. Other companies find that when they do expand, it makes strategic sense to go to another high-cost location.

Still, the secondary hub phenomenon may offer a partial antidote to complaints that a few regions are hogging too much of the venture capital pie. While unicorns still overwhelmingly headquarter in a handful of cities, at least they’re spreading their wings and providing more jobs in other places, too.

For this analysis, we were looking at U.S. unicorns with secondary offices in other North American cities. We began with a list of 125 U.S.-based companies and looked at open positions advertised on their websites, focusing on job location.

We excluded job offerings related to representing a local market. For instance, a San Francisco company seeking a sales rep in Chicago to sell to Chicago customers doesn’t count. Instead, we looked for openings for team members handling core operations, including engineering, finances and company-wide customer support. We also excluded secondary offices outside of North America.

Additionally, we were looking principally for companies expanding into lower-cost areas. In many cases, we did see companies strategically adding staff in other high-cost locations, such as New York and Silicon Valley.

A final note pertains to Austin, Texas. We did see several unicorns based elsewhere with job openings in Austin. However, we did not include the city in the sections above because Austin, although a lower-cost location than Silicon Valley, may also be characterized as a large, mature technology and startup hub in its own right.