Review: A week in an Audi R8 Spyder, an everyday supercar

It’s the sounds. The wisps and growls and gargles. Hit the red Start Engine button on the steering wheel and the world wakes up to the sounds of rumbling V10.

The Audi R8 Spyder is a marvelous cup of coffee and a great way to start the day. What’s more, after a week as treating this red R8 as my daily driver, I can plainly state the supercar is surprisingly easy to live with as long as some concessions are made. Sometimes, when slogging through a daily routine, it’s easy to forget you’re driving a mid-engine supercar. And then you put your foot down and the sun explodes. 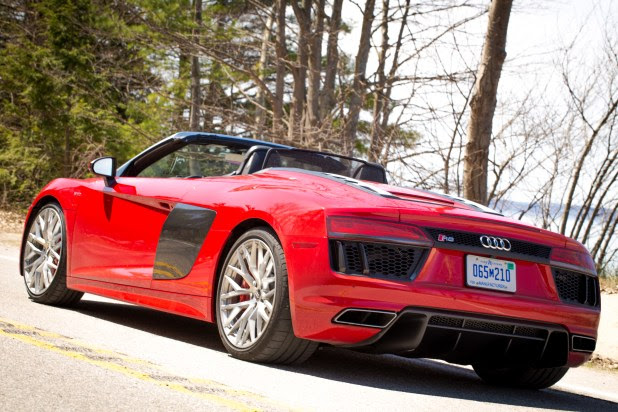 Spring arrived in Michigan just in time for some cruising with the Audi R8 Spyder. The snow is gone and the trees are budding. The sun is bright and warm and perfect for a bit of driving with the top down on this mid-engine machine.

This R8 packs a 10 cylinder engine paired to a fantastic 7 speed, dual-clutch automatic transmission that converts the engine’s raw power into speed. It’s all-wheel drive and capable of hitting 60 mph in a few ticks over three seconds. And the top folds down, too. To say the previous and then state the R8 Spyder is comfortable is to say the car is special.

This 2018 Audi R8 Spyder is lovely. It’s not audacious or extravagant. The R8 is effortless. After a week of driving this R8, I find it closer to pedestrian than exotic and I’m okay with that. It’s a testament to the engineering that went into developing this vehicle. Instead of just stuffing the biggest engine possible into the smallest body, Audi developed a platform that’s manageable yet capable of producing intense excitement. It’s a pleasant blend of Audi refinement and mid-engine driving dynamics. Simply put: The R8 Spyder is an everyday supercar.

Most drivers should be able to jump in an R8 and feel confident. The car doesn’t require extraordinary skill to tap the extraordinary potential. The steering is precise and the ride firm yet not backbreaking. It handled Michigan’s dilapidated roads with the same amount of confidence as an ordinary sedan. Visibility is good with the top up and spectacular when it’s down. A person can feel like a skilled driver after just a few minutes in an R8.

I took the R8 on a several hundred mile road trip from Michigan’s Detroit region to Traverse City. It was a lovely Spring weekend and I spent most of it finding deserted back roads winding around the cherry farms and wineries in Northern Michigan.

This is a car of two minds and they’re controlled by a button on the wheel. The drive mode button on the steering wheel allows the driver to select comfort or dynamic modes. The difference between the two modes is profound. When on comfort mode, the R8 is smooth, quiet and capable of a mindless ride in stop and go traffic. Use this mode around town between stop lights and your passenger will forget they’re in a $200,000 car. Click on dynamic and they’ll immediately be reminded by the roar of the engine.

The dynamic mode is where the R8 comes alive. When clicked on, the engine growls and spits, shaking as it awaits instructions. Gear shifts are held longer than when in comfort mode and the ride is stiffened. The steering tightens up and feels as if it could bend time and space. Turn off the traction control to activate the launch control and the car gets even meaner.

Piloting the R8 Spyder in dynamic mode is akin to making the Kessel Run in less than 12 parsecs. It turns you into a time traveler.

The car eagerly dives into corners and breathes fire as it exits at full throttle while the AWD system keeps all four tires planted. Body roll is nonexistent and the brakes feel like they could stop a speeding bullet. When in dynamic mode, the engine screams when the throttle is planted on the floor. The transmission rockets to the red-line of 8.5k and clicks through the seven gears with determined precision.

When the launch mode is activated, the car’s computer takes over, and only takes two gears to hit 60 mph in around three seconds; the R8 hits 100 mph in third and still has four more gears available for use. Launching the car is as easy as drag racing a car on a PlayStation game.

Through it all, the crazy acceleration and hard breaking and stop-and-go traffic of I-75, I managed an average of 19.6 mpg during my week with the car. 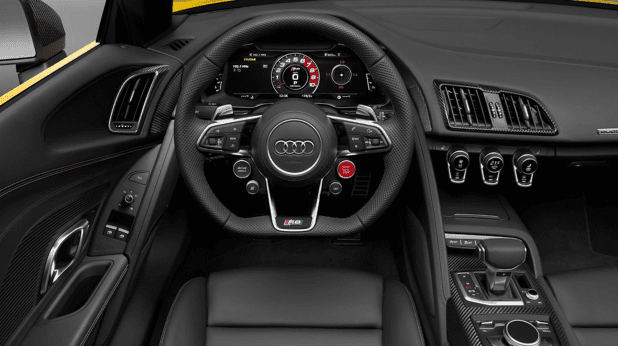 The car’s software is impressive considering its age. Audi rolled out this version several years ago and it still holds up as one of the best available.

The familiar interior is what sets the R8 Spyder apart from me. Audi has some of the best interiors of any automaker and the company has wisely equipped most models in a similar manner. The R8 is no different. Besides some extra carbon fiber, the inside of the R8 looks similar to the inside of a $65k Audi TT RS.

This is car that a person could drive on most days. As long as they don’t have a family. Or a golf buddy. Or a passenger with more luggage than a carry-on suitcase. Storage space is limited and the car cannot hold more than two people.

The R8 sits on the ground. There’s just a few inches between the bottom and the road and I avoided aggressive speed bumps during my time with the car. Getting in the car is easy enough. The doors open like on a normal car and there is plenty of room even with the top down to fall into the car. Unlike in other supercars, getting out of the car does not require one to fold in half and roll out with the door open. Just stand up and get out.

The seats are supportive because of course they are. This is a nearly $200,000 race car that a person can drive to the farmer’s market. The seats are firm yet giving and feature as many adjustment options as any other Audi sports car. Reclining is not an option though. It’s limited by the firewall located between the passenger compartment and the massive engine.

There is very little storage in the R8. The passenger seat is the only place to store a golf bag. The trunk is in the front as the engine takes up the rear of the car. During my overnight trip with the R8, I took a duffel bag, computer bag, and extra shoes. I filled the front trunk. Inside the cabin is a glove box and a small, lockable compartment on the wall between the two seats. This compartment can hold a cell phone or sunglasses and nothing else.

I have one request for Audi. It’s not too much to ask for the sun visor to rotate to the left of the driver and to the right of the passenger. You know, like on any other car.

The Audi R8 Spyder feels alive. It feels like a sentient being capable of making decisions quicker than the driver and I’m okay with that as long as I get to go along for the ride.

To say this is an everyday supercar is to, by definition, say a person could drive this car everyday. I think it’s true. For the right person, living in the right area with lovely weather and smooth roads, this could be a car that’s driven daily. For most others, though, other cars like a Porsche 911 Turbo S or Tesla Model S offer similar speed and excitement while having more storage space than a carry-on suitcase.

There is no denying Audi made a fantastic machine in the R8. Careful balancing was used to craft the vehicle that resulted in a wonderful droptop perfectly suited for most drivers. Respect.