Looking for a better exit? Get out of the game early

Jason Rowley is a venture capital and technology reporter for Crunchbase News.
More posts by this contributor

VC investing is a game of putting money into a company and hopefully getting more out. In an ideal world, the value placed on a company at acquisition or initial public offering would be some large multiple of the amount of money its investors committed.

As it happens, that multiple on invested capital (MOIC) makes for a fairly decent heuristic for measuring company and investor performance. Most critically, it provides a handy metric to use for answering these questions: For US-based companies, have exit multiples changed in a meaningful way over time? And, if so, does this suggest something about the investment landscape overall?

Coming up with an answer to this question required a specific subset of funding and exit data from Crunchbase. If you’re interested in the how and why behind the data, check out the Data and Methodology section at the very end of the article. If not, we’ll cut right to the chase.

Exit multiples may be on the rise

A rather conservative analysis of Crunchbase data suggests that, over the past decade or so, exit multiples were on the rise before leveling off somewhat.

Below, you can see a chart depicting median MOIC for a set of U.S.-based companies with complete (as best we can tell) equity funding histories stretching back to Series A or earlier, which also have a known valuation at time of exit. That valuation is either the price paid by an acquirer or the value of the company at the time it went public. In an effort to reduce the impact of outliers, we only used companies with two or more recorded funding rounds. With that throat-clearing out of the way, here’s median MOIC over time: 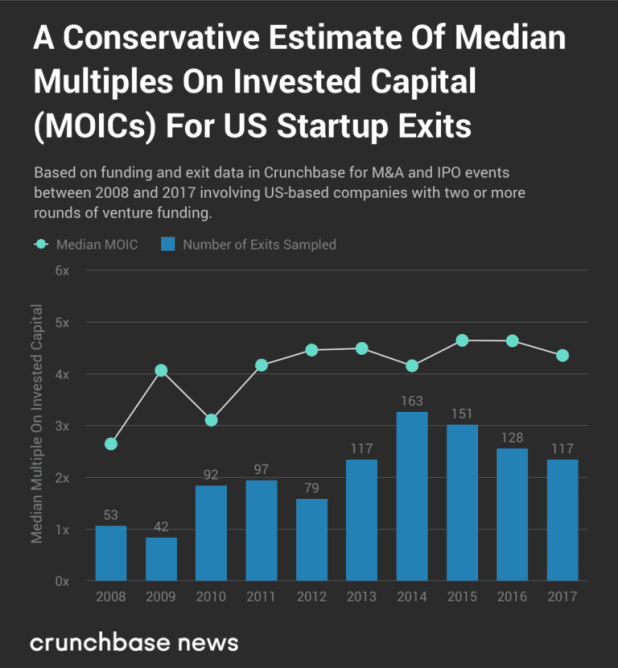 It should be noted for the record that the shape of the above chart somewhat changes depending on the data is filtered. Including exit multiples for companies with only one reported funding round resulted in slightly higher median figures for each year and a more steady linear climb upward. But that’s probably due to the number of comically-high multiples some companies with single small rounds and large exit values produced. There are surely examples of companies that raised $1 million once and later sold for $100 million, but those are fewer and further between than companies with missing data from later rounds.

What might be driving the rise in exit multiples?

The rise in exit multiples may have to do with the fact that more companies are getting acquired at earlier stages.

Crunchbase data suggests that startups earlier in the funding cycle tend to deliver better exit multiples. In an effort to denoise the data a bit, we took the Crunchbase exit dataset and filtered out the companies that raised only one round. (Companies that raised only one round produced a lot of crazy outlier data points that skewed final results.) 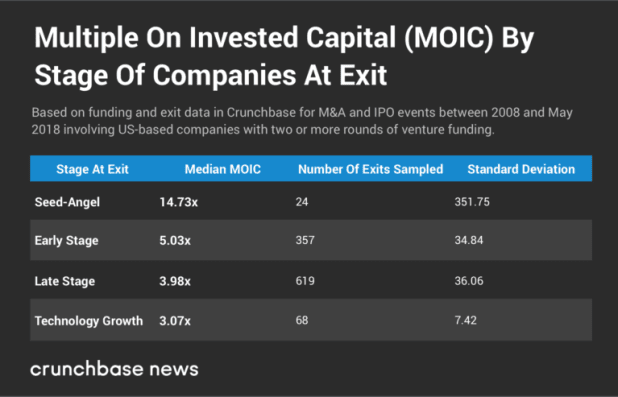 This suggests that, in general, the earlier a startup is acquired in the funding cycle the more likely it is to deliver larger multiples on invested capital.

Now, granted, we’re working off of small sample sets with a fair amount of variability here, particularly for startups on opposite ends of the funding lifecycle. There is going to be some sampling bias here. Founders and investors are less likely to self-report disappointing numbers; therefore, these findings aren’t ironclad from the perspective of statistical significance.

But it’s a finding that nonetheless echoes a prior Crunchbase News analysis, which found a slight but statistically significant inverse relationship between the amount of capital a startup raises and the multiple its exit delivers to investors and other stakeholders. In other words, startups that raise less money (such as those at seed and early-stage) tend to deliver better multiples on invested capital.

So does the tendency for earlier-stage companies to deliver better investment multiples have anything to do with upward movement in MOIC ratios? It could, particularly if more seed and early-stage startups are headed to the exit these days. And as it turns out, our data suggest that’s happening.

The chart below shows the breakdown of exits for venture-backed companies based on the last stage of funding the company raised prior to being acquired or going public. We show a decade’s worth of funding data, this time including all exits from U.S. companies with known venture funding histories since seed or early stage—some 5,275 liquidity events in all. For 2018, we also include stats for exits through the beginning of May. Given reporting delays and the fact that there are still eight months left in the year, this is certainly subject to change.

Now, to be clear, over the past decade, there has been some notable growth in the overall number of exits for U.S.-based venture-backed companies across all stages.

But, in some ways, the raw number of deals doesn’t much matter. After all, figures from several years ago aren’t really actionable to founders and investors looking for an exit sometime this year. What matters, then, is what the mix of exits looks like, and at least for the set of companies we analyzed here, the past ten years brought an ultimately small but nonetheless notable shift in the mix of companies that get acquired or go public.

Seed and early-stage companies now make up a larger proportion of the population of exited companies now than in the past. And since companies at that stage tend to deliver higher multiples, it is likely responsible for part of the increase over time.

There are certainly other factors besides the influx of seed and early-stage ventures into the mix of exits, but sussing those out will require further investigation.

It should go without saying that any venture-backed company that gets acquired or goes public is a success, at least of some sort. After all, a tiny fraction of new businesses secure outside funding from angel investors or venture capitalists, and only a small proportion of those get acquired.

Any exit is better than none.

Let’s start by saying that there is probably no canonically correct way to do this sort of analysis and that since Crunchbase News is working off of private company data, what hasn’t been aggregated programmatically is subject to self-reporting bias. Founders and investors are more likely to disclose exit valuations that make them look good, so this may skew our findings higher.

Here, we use the same funding stage definitions as Crunchbase News does in its quarterly reporting.

Building the base dataset

Here are the basic process we used:

In conjunction with choosing to start with Series A and earlier funding events, we believe this produced a set of companies with reasonably complete funding histories. Granted, there are “unknown unknowns,” like later rounds that weren’t captured in Crunchbase, but there is no good way to control for those.